The History of Kalanga People

So who exactly are the Kalanga?

“The Kalanga originate in the North East Africa region, specifically the Sudan-Egypt-Ethiopia region. Like many Bantu groups, they trekked from the North down South, finally settling in the region now called Southern Africa. The difference with other groups is that the Kalanga settled Africa south of the Zambezi over two millennia ago. By 100 AD, they had already settled in the lands now called Zimbabwe, Mozambique, South Africa and Botswana, with most groups arriving between 500 and 1700 years later (the Sotho-Tswana about 500AD, the Nguni about 1600 and the ‘Shona’ about 1700).

By the earliest centuries of the Christian era (500AD) the Kalanga had established what archeologists have called the Leopard’s Kopje Culture. It was an Iron Age sequence culture which was the first in Sub-Saharan Africa to practice mixed farming; mine, smelt and trade in gold, copper and iron. By 1000 AD, the Kalanga had become a sophisticated people, establishing the first city-state in Sub-Saharan Africa, the Maphungubgwe City, on the confluence of the Limpopo and Shashe Rivers.

Here they traded in gold, and indeed so great was this industry at Maphungubgwe that archeologists have found several artifacts made from that precious mineral there. Of course, the most famous is the Golden Rhino, which now forms the Order of Maphungubgwe, South Africa’s highest national honor.

From Maphungubgwe the Kalanga expanded their state, moving to and constructing Great Zimbabwe, and later Khami. In all these areas they carried on their industries and trade. They traded with the Arabians, the Chinese, the Ethiopians, the Portuguese and Phoenicians. It has been suggested by one writer – Gayre of Gayre – that much of the gold that found its way into the Solomonic Temple and Palace mentioned in the Bible originated among the Kalanga in what later became Zimbabwe.

The Zimbabwe Civilization – epitomized by Maphungubgwe, Great Zimbabwe, and Khami – three of the four man-made UNESCO World Heritage sites in Southern Africa, can be classified as the greatest civilization ever established Africa south of the Sahara. Indeed, barring its lack of a writing culture, it can be classed in the same level with the other great civilizations of the world, from the Akkadian to the Sumerian to the Egyptian to the Axumite to the Graeco-Roman Civilizations.

On the political side, the Kalanga established the greatest kingdoms ever established Africa south of the Sahara, both in terms of power, wealth and expanse. They established the Monomotapa Kingdom which swept from the Zambezi to the Makhado Mountains (Luis Trichardt) north to south, and from the Tendankulu (now Pungwe River) in the middle of Mozambique to the Makadikadi Salt Pans on the boundary of the Kalahari Desert, east west. 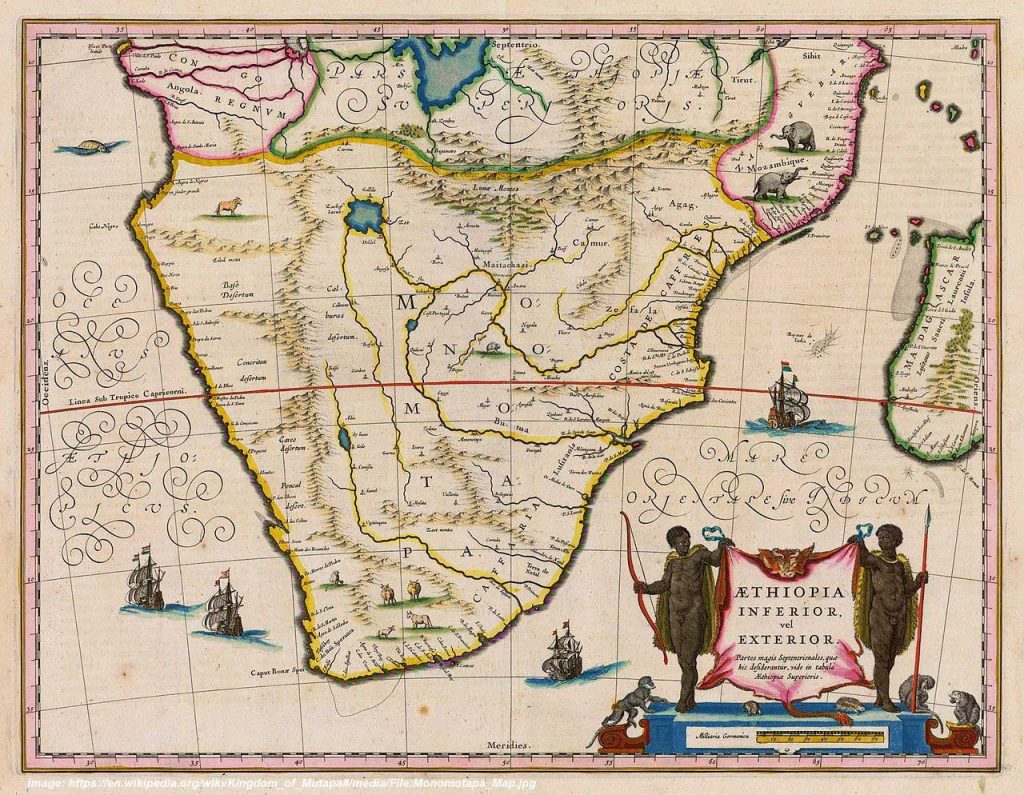 The Monomotapa Kingdom, which existed for about 500 years (1000-1500) as the greatest polity in Southern Africa, later disintegrated as a result of external attacks and internal decay. It would be succeeded by the Togwa Kingdom which was headquartered at Khami, 22km west of Bulawayo. The Togwa Kingdom, which had been established by Madabhale Shoko/Ncube, later Tjibundule, existed for about 200 years, after which its ruling dynasty, the Tjibundule Dynasty, was overthrown by Mambo Dombolakona-Tjing’wango Dlembewu Moyo, otherwise known as Tjangamire.

(Tjangamire, a title which originated with the Monomotapa Dynasty when the Arabs still traded in the land, is a combination of two words, the name ‘Tjanga’, and the title Amir/Emir, meaning ‘The Justice.’ The title emir is still in usage in Arab lands, which is why some of them are called Emirates. Tjangamire is not a Shona word as commonly believed. It is a Kalanga-Arabic word.)

The Lozwi Kingdom of course was to be overthrown after a nearly 30-year onslaught by a succession of five impis – four Nguni and three non-Nguni, these being: the Swati of Mtshetshenyana and Nyamazana, the Ngoni of Zwangendaba, the Gaza-Nguni of Soshangane, the Makololo of Sebituane, the Tswana of Kgari and the Portuguese. This Kingdom finally fell about 1830 with the arrival of the Ndebele of Mzilikazi.

The Kalanga Identified by their Tribes and Surnames

Being Kalanga therefore does not mean TjiKalanga-speaking, but it is an ethno-racial identity. Once born a Kalanga always a Kalanga, as long as one carries ancestral Kalanga blood. In other words, as long as one has one or both parents who is or was Kalanga, they are Kalanga too. But how do they get to know if they are ancestrally Kalanga? The answer is to be found in their surname.

A close look at the numbers of people bearing these surnames shows that the Kalanga Nation is perhaps one of the largest in Southern Africa, perhaps surpassed only by the Zulu.

Choose a project to make a donation!

Help in various ways. Choose a project you want to support. Become a regular sponsor to one of our annual events. Any donations, will help to achieve our goal.

Get involved and become a member and ensure your continous support. You can choose from various mebership categories one that suits you best!

Get involved as a sponsor for our events!

There are many ways of you to become a sponsor or partner of our projects. Browse through our projects and help achieve our targets for the upcoming year.