George Silundika High was established in 1982 as part of a new ZIMFEP (Zimbabwe Foundation for Education with Production) program by the government and its international partners. Its first students were young Zimbabwean returnees from refugee camps in Zambia and Botswana following the end of the war for independence in 1980. The school is situated on what used to be Mbongolo Farm in Nyamandlovu, Matabeleland. The school consists of a primary school and a secondary school on the same site.

Since its establishment, the school has trained students in practical skills such as woodwork, sewing, agriculture and home economics to help prepare them to make a living through self-employment. The school was named after the veteran nationalist and liberation hero, Tarcisius Malan George Silundika.

The surviving members of the late nationalist family have prioritized playing a supportive role in the life of the school. Once completed, the TG Silundika Cultural Community Centre and Memorial Library will work with the school towards the establishment of mutually beneficial partnerships such as internships and possible scholarship programs.

Photo above: Members of the George Silundika School teaching staff. Third from the left is the principal, Mr Ncube. 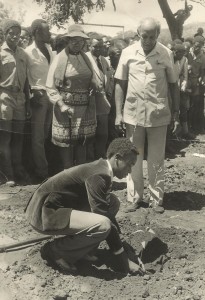 The late national hero’s son Felix planting a tree at George Silundika High School in 1983. Accompanying him was his mother the late Mrs TG Silundika and Deputy Minister of Education Senator Joseph Culverwell.