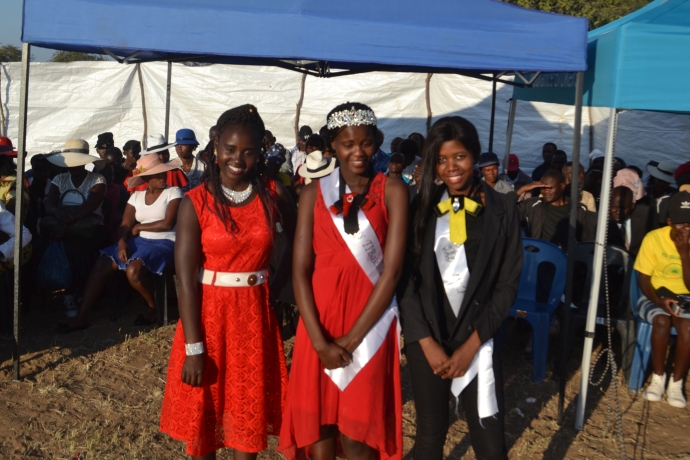 An Unrivaled Display of Raw Talent

Picture yourself dancing your face off on the main stage to the late Kalanga singer Solomon Sikhuza’s awesome music with scores of other people around you. Such was the case at TiBaKalanga Festival III held on 1-2 June 2019 which I have no doubt will go down as one of the most enjoyable events ever held in rural Zimbabwe. It was the third annual cultural festival held in open air at the TG Silundika Cultural Community Centre, the TGSCCC at Gala, Ward 6 Bulilima District in Zimbabwe.  Having missed the TiBaKalanga II, I had vowed to myself that nothing will stop me from attending the 3rd,   not even the my car tyre which blew up on my way from the city of Bulawayo, 167km away from Gala. In the run up to the weekend of the festival, I had a strong feeling that the event would be a great success. This was partly due to an official announcement by Headman Manguba that he will henceforth be actively involved in the development of the cultural centre and support its programs. He had effectively endorsed the festival and other programs.

I arrived at the centre just after lunch time, the opening ceremony was about to kick off. It had been delayed for a few hours in deferrence to the funeral of the liberation hero Dr Dumiso Dabengwa which I attended. Under the theme:  ’’Tilitose Takabhatana Tobhudilila…..Aatimilikeni.’’ Finally the openning ceremony got started but only after the centre chairman Mfundo Tsambani, with the help of the MC, Mr Mzi Ncube shepherded the people that had been milling around vending stalls into the enclosure close to the main stage.

Leading the openning prayer was the local elder Mrs Paba Tshuma also respectably known as MaDube who over the last few years has served as Treasurer in the centre’s management committee.  In her prayer, delivered in our native Kalanga, MaDube made an impassioned plea to the community to support community development initiatives such as the festival which promotes commerce and economic activity in the district. The prayer was followed by the now very familiar Gala Primary School Choir with a rendition of the national anthem.

After the welcome remarks by the centre Chairman Mr Mfundo Tsambani, came Headman Manguba.  The headman took to the podium where he repeated his solemn pledge before a cheering crowd to support the development of the TGSCCC and its programs.  His speech was well received.  The headman was followed by Elder Douglas Nleya the Festival Director who gave a historical account of the Kalanga people. It was an illectually stimulating and very well researched account.  I was next. My role was to do  roll call of the artists, a task that I performed with relative ease. My profession as a teacher has prepared me well for this kind of activity.  Finally it was Mrs Virginia Ndlovu turn. Her role was likely the most anticipated all day: to declare the festival open.  Little did anyone know that by so doing, she had literally opened the door to an amazing display of talent never before seen in the district. Before the live performances though, there was a short break for guests to sample local delicacies. Various vendors had set up shop across the centre campus selling all kinds of food ranging from fried chicken to roasted peanuts. My personal favorite were the traditional Kalanga dishes prepared by our own cooks at the centre, hadza ne nyama yewuku, ne nlibo hmmm!

First up on the main stage was Felonia Dumani, a young talented poet from Wuwana Village. She’d written a masterpiece poem dedicated to the memory of TG Silundika after whom our cultural centre was named. She was followed by a 10 piece traditional dance group from George Silundika High School in Nyamandlovu, brought to the event by a charismatic and fervent promoter of Kalanga culture, B. S. Ncube their headmaster along with Ms Sindi Ncube, a staff member. They were followed by the local Gala-Zinatha Traditional Dance Group who thrilled the crowd with their Hosana traditional dancing to a steady beat of drums and a hand clapping routine. What a perfect start to a cultural festival. They were followed by another local act, the Bhatanani Choir from neighboring Kungubo Village. Their routine included drama, story telling that kept the audience fully captivated.

Headlining the music and dance segment of the entertainment was a self styled young lady from Kungubo Village who goes by her stage name Trapp Queen. It was an energetic display of foot work by the young lady whose self confidence made got the audience clapping and cameras clicking endlessly.  Trapp Queen’s fancy footwork was soon followed by an equally energetic 4 piece dance troupe from Ntoli- Village – NuEra. A definite crowd pleaser, danced to the beat of Afro-Pop music non stop for almost 30 minutes. Their style of dancing as a group and then alternating as individuals has put them firmly on the map as solid entertainers.

As I looked outside, the sun was setting on the horizon but the temperatures remained amazingly mild for a winter night. A peep outside the enclosure, I saw the vendors especially those selling the traditional brew, INGWEBU having a time of their life. Business must have been good. Earlier, I was told there was a bit of commotion when security guards had to handover an unruly, drunken youth to the police. He had been physically disrespectful to women.  The police drove him to a nearby precint for a little disciplinary lesson. When they returned they assured everyone that he would not repeat his stupid mistake…….they were right….he didn’t. Whatever magic they performed worked….. By this time I had positioned myself firmly close to the front of the stage awaiting the highlight of the night – a music performance by the Maskandi band Thawulo Skhuza. This band’s performance was completely different from what had been on offer all day. The band, from the neighboring village of Ntoli played a truly amazing set. Their high kicks reminded me of the Zulu a capella band Lady Smith Black Mambazo of South Africa. When I looked to the left side of the stage I caught a glimpse of both the MC Mzi Ncube and DJ Nyasha Musekiwa fully consumed in the band’s dance routine. One could easily have mistaken them for band members. The rest of the audience seemed to have been blown away. Thawulo Skhuza is up and coming fast into the music industry, truly a band to watch. 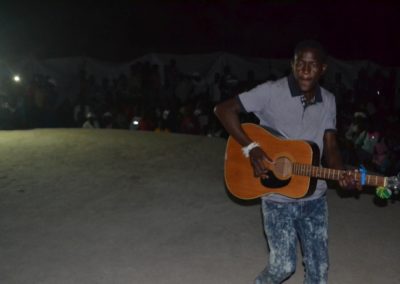 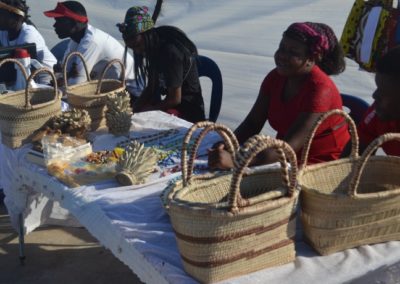 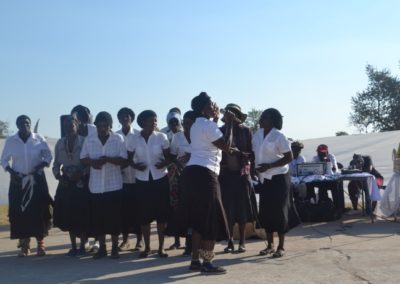 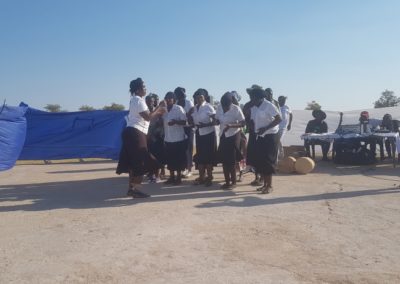 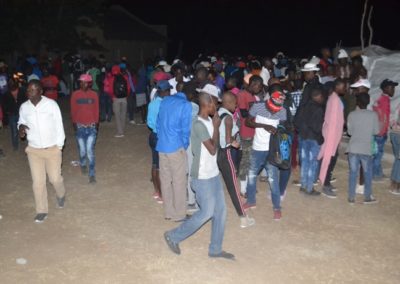 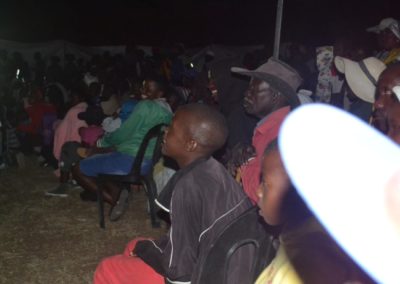 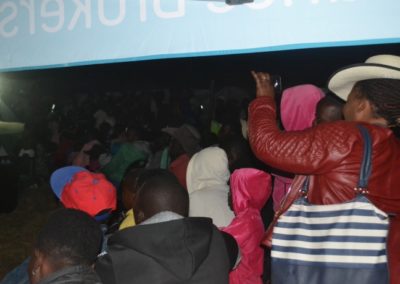 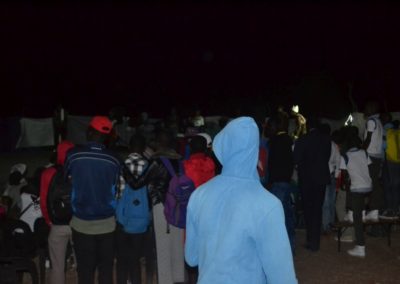 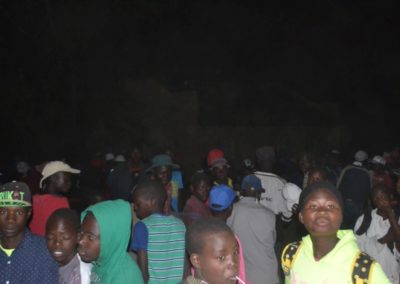 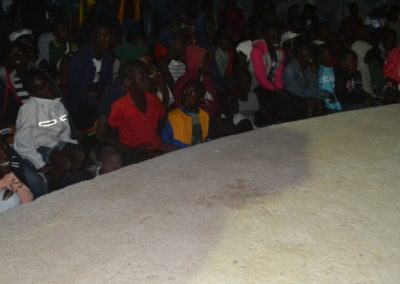 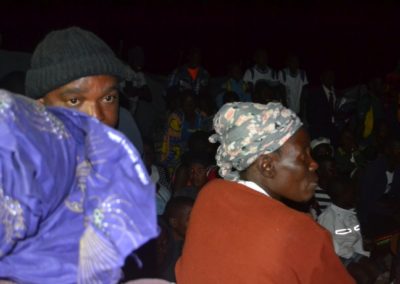 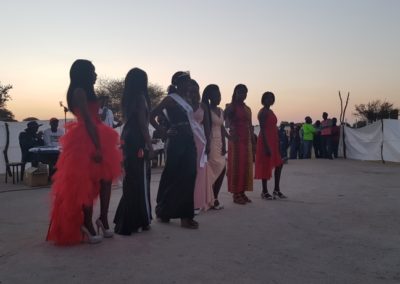 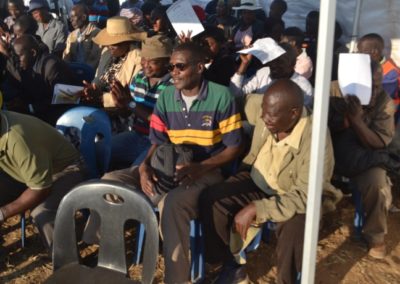 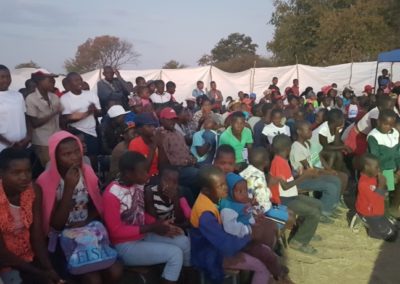 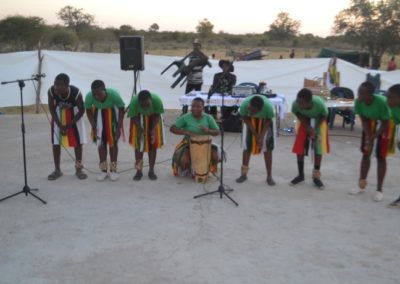 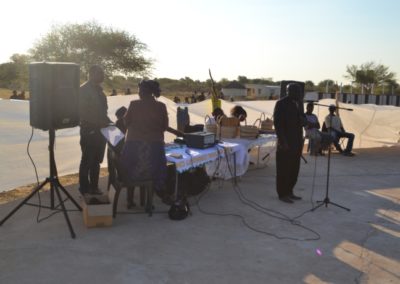 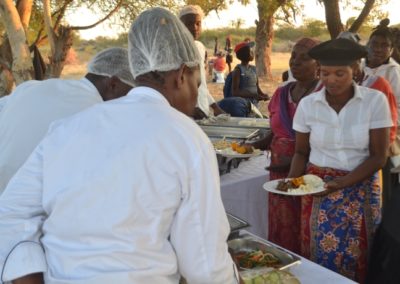 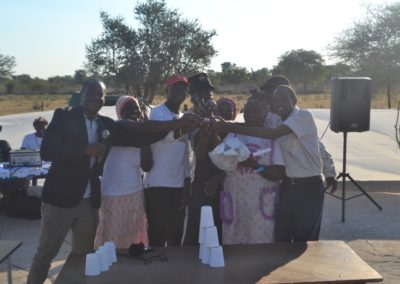 Launch of the Community Football Cup 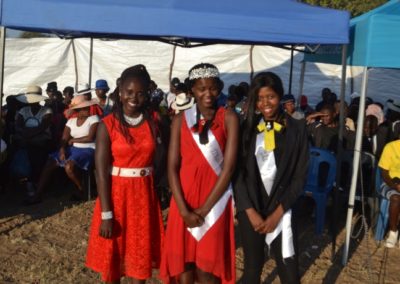 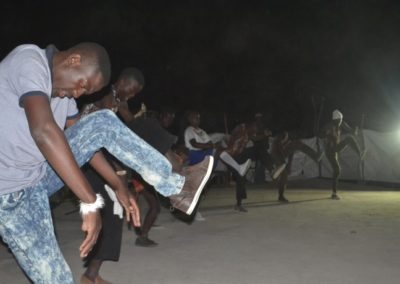 Day two of the cultural festival offered much of the same with all the artist who performed the previous day taking to the stage again but doing differen sets. This was of course in exception of the fashion show organized and presented by Merryian Nkomo and Mandy Makhiwa. Thank God mother nature gave us the same mild to warm temperatures throughout day two. The fashion show looked pretty much like a rerun of the beauty pageant held a week prior with the winner, Miss TiBaKalanga 2019  Elizabeth Mpofu with the first and second princesses gracing the stage. They were joined by other models mainly from the locality and truly dressed to impress. Another major highlight of day was the grand finale of the festival when more than a dozen people took to the stage to dance to the late singer Solomon Skhuza’s Banolila. At that moment I reflected on how much Professor Gordon Bronitsky would had been proud had he been in attendance. The US anthropologists was instrumental in helping the community launch the TiBaKalanga Festival. No doubt, this festival is now firmly on the map and growing by leaps and bounds.